Please contact us for data or other information concerning the views below.

As testing for the virus expands nationwide, the percent of people who are positive (have the virus) has been on a steady decline. The most marked improvement is in New York State where the daily number testing positive has fallen from 50% in late March to 10% now. New York State has tested over a million people since the beginning of the pandemic and is now testing over 20,000 daily. 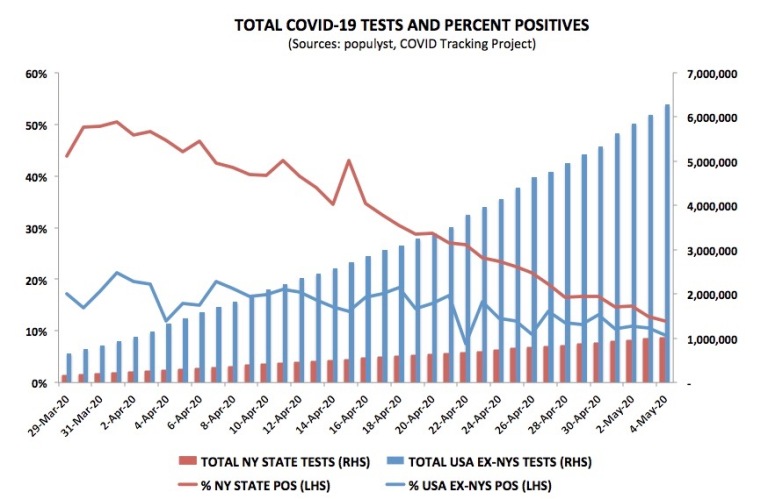 In the rest of the United States, the improvement is less dramatic but still significant. The daily number testing positive is down from 20% in March to less than 10% today. The total number of tests in the United States excluding New York State is now 6.5 million with over 200,000 tests conducted daily.

Is it then time to remove the lockdowns and re-open? If the current downward trends in new confirmed cases and deaths continue, New York State would be able to reopen before the end of May. 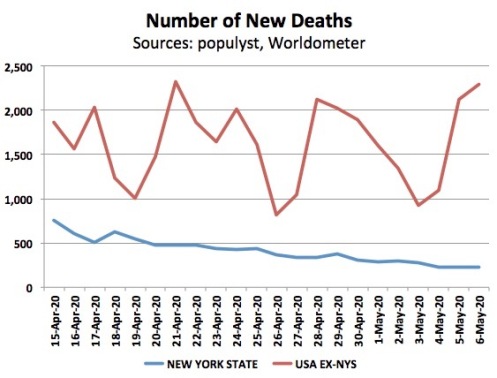 The rest of the country is more of a mixed situation.

When looked at as a whole, the numbers of confirmed cases and deaths appear to be stagnating, and therefore do not yet signal the all-clear for re-opening. Because of expanded testing, a level number of confirmed cases can be interpreted as a positive trend because the percent of positives is declining. However, this trend will be more credible if it is confirmed by declining deaths within a couple of weeks. The lag between cases and deaths is about two weeks.

Looking now on an individual state or locality level, the total numbers are small enough in each case outside of the tri-state region that authorities may decide to re-open and watch the situation closely.

Current trends are encouraging for the next few weeks and months but experts say that the number of tests needs to rise multi-fold to help curb the onset of a second wave. This wave could come in the fall if the virus is seasonal.

It was somewhat fortunate that the virus struck the first time in the final days of winter. But if it comes back in the fall, it will have six months to wreak damage before spring returns. One expects that we will be far better prepared by then with a much wider availability of tests and masks.