On the usual political spectrum, there are left and right, people who call themselves progressive or conservative, socialist/social democrat or capitalist. But these labels seem to mean less today than in the past. The Trump phenomenon highlighted another divide that has little to do with the historic left and right. Crudely speaking, we can call it coastal vs. non-coastal, urban vs. rural, ethnically diverse vs. more homogeneous, elitist vs. populist. This at least is the way the dominant media sees it.

At the same time, the old labels are not completely dead. So if we try to overlay the new on the old and to categorize the Trump following, we could say that some of the old guard conservatives joined forces with the new rural populists. This is a little complicated and barely makes sense given that the former include some of the elites, in other words the very same people who have angered the populists for the past decade. Many people who want lower taxes and free trade and globalization voted for the same person, Donald Trump, as did people who want import tariffs and restrictions on the flows of people, capital and goods. Some of the same people who survived in 2008 thanks to Wall Street bailouts voted for the same candidate as did people who are still seething over the bailouts.

When a human construct no longer makes sense because it is the product of decades of layering of one strain over another, it may be better to restart with a clean slate and to find new models to explain the present.

The older form of cronyism claims to be capitalistic (thus the oft-seen oxymoron “crony capitalism”) and the newer form claims to be egalitarian but they are essentially the same, except for the identities of the cronies at the top who extract the most wealth for themselves and their friends. Because egalitarianism is usually less efficient at managing wealth, there may also be a smaller number of cronies under socialism, which makes the infighting among its leaders that much more bitter and savage.

On this theory and on current trends then, Bernie Sanders would be elected President of the United States in 2020.

This may look like a bold assertion, mitigated only by the fact that Senator Sanders is already aged 75 today. If he were elected in 2020, could he remain in office until the age of 83? Very possible, given the medical profession’s ability to keep us alive and functioning well into our eighties. For example, another socialist, Robert Mugabe of Zimbabwe, is now 93 and intends to run for another five-year term in 2018.

At any rate, voters will not care about the Senator’s age, just as they did not care about candidate Trump’s own shortcomings. What will matter to them is that candidate Sanders will be the flag bearer leading in his wake a younger Vice-President and a slew of new generation Democrats who will be just as eager to undo four years of Trump/Pence as Trump/Pence have been to undo eight years of Obama/Biden.

To every action, there is an equal or, in the case of politics, a greater reaction. When President Obama alienated half of the electorate by passing the Affordable Care Act through unorthodox procedures, the seed for the Tea Party and then for the rise of Trump was planted. And Trump has already planted the seed for Sanders or of his young charismatic political heir, whoever he or she may be. Or, if that seed was already planted thanks to Senator Sanders’ own strong showing during the campaign, the President’s recent actions have provided a truckload of nutritious fertilizer. The anti-Trump blowback so far does not look like a slow growing plant.

Although he has styled himself a populist, Mr. Trump is mainly a populist when he fires messages on Twitter or when he holds rallies in rural settings, places where he would otherwise rarely venture except perhaps to play golf. But when he goes back to New York, Washington or Mar-a-Lago, he is once again surrounded through his own choice by the same usual East Coast elites who for three decades have thrived at the courts of the Bushes, the Clintons and the Obamas.

President Trump’s entourage is more elitist than populistic. Even the unconventional Steve Bannon graduated from Harvard Business School and was a one-time banker, and cannot therefore claim the life story of an authentic populist. Team Trump’s populism is not truly organic, but looks instead like posturing and voyeurism, like that of investment bankers occupying the most expensive seats at a Bruce Springsteen concert. It can be very enjoyable for the elite to glimpse the world of the working class, so long as they are never at risk of becoming a part of it.

The President’s barbell strategy of on the one hand giving lip service to blue-collar populism while on the road, and on the other hand appointing some of the same people that a dyed in the wool elitist would have also appointed, has paid off very nicely so far. It is however inherently unstable and unsustainable except under the scenario of a thriving economy. To his credit, Mr. Trump knows this, which is why he will be holding a rally for his base every so often as a way to tell them that he has not forgotten them, even though finance and energy billionaires happen to be among his favorite people in the world. Normally, only a casuist would attempt to square this circle but the President’s distinct genius has enabled him to pull if off so far.

It will be interesting to see for how long this magical balancing act can be maintained. An easy answer would be: until the next economic slowdown. It is fine to play both sides as long as things are improving, or expected to be improving soon. People believe what they want to believe. But failure to deliver for the thriving elite or for the suffering working class will turn either or both into potent Trump adversaries. And this is how an opening would be created for Senator Sanders.

TRiUMPh of the Cronies 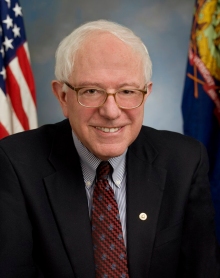 Instead of attacking cronyism, the endemic problem of our age, as a true populist might do, President Trump has instead given it a strong new lease on life. In truth, whether Hillary Clinton or Donald Trump prevailed last November, the die had been cast that the winner would represent the culmination of cronyism in its ultimate triumph. Both Mrs. Clinton and Mr. Trump have crony credentials that exceed those of former presidents. Therefore, the election of POTUS 45 probably signaled the end of something and not the beginning of something, notwithstanding Mr. Trump’s new-dawn declarations to the contrary.

For evidence of cronyism’s final ascent to the seat of power, consider again Mr. Trump’s selections for cabinet and advisory positions. Several are successful operators in business activities that are often associated with cronyism, in this case narrow sub-sectors of energy, finance, law and real estate. What differentiates them is not their success, which by itself would be admirable, but their success in cracks of the laissez-faire economy that are extractive or rent-seeking and largely reliant on government dealing and connections, which is less admirable.

The New York Times reported the following on 15 April 2017:

President Trump is populating the White House and federal agencies with former lobbyists, lawyers and consultants who in many cases are helping to craft new policies for the same industries in which they recently earned a paycheck.

Socialism’s day would come in four years because Mr. Trump has misread the economic tea leaves and has ascribed the moribund economy to an excess of taxes and regulations instead of to the true culprit, which is deteriorating demographics. As a consequence his efforts to ignite another Reagan style boom and to create 25 million new jobs are unlikely to succeed. Mr. Sanders is one of the most vocal critics of cronyism and his speech will be rich with I-told-you-sos if President Trump’s impending deregulation of Wall Street leads to another financial crisis on top of a weaker economy.

After being disappointed by both Obama and Trump, the struggling working class and shrinking middle class will be ready to try yet another new thing. Electing a socialist will be the boomers’ last hurrah and the millennials rose-tinted dream of a new paradise finally blanketing the earth. Joel Kotkin recently noted:

The millennials —arguably the most progressive generation since the ’30s—could drive our politics not only leftward, but towards an increasingly socialist reality, overturning many of the very things that long have defined American life.

The long-term hopes of the American left lie with the millennial generation. The roughly 90 million Americans born between 1984 and 2004 seem susceptible to the quasi socialist ideology of the post-Obama Democratic Party. They are also far more liberal on key social issues—gender and gay rights, immigration, marijuana legalization—than any previous generation. They comprise the most diverse adult generation in American history: some 40 percent of millennials come from minority groups, compared to some 30 percent for boomers and less than 20 percent for the silent and the greatest generations.

Millennials’ defining political trait is their embrace of activist government. Some 54 percent of millennials, notes Pew, favor a larger government, compared to only 39 percent of older generations. One reason: Millennials face the worst economic circumstances of any generation since the Depression, including daunting challenges to home ownership. More than other generations, they have less reason to be enamored with capitalism.

As to Senator Sanders’ math in 2020, it should be remembered that Mr. Trump carried two pivotal states, Michigan and Wisconsin, by very narrow margins in the general election and that Mr. Sanders won both of these states in the primaries. It would not take a lot for both to tip to Mr. Sanders in a possible Sanders-Trump showdown in 2020.

As noted in So You Want a Revolution, the United States is one of many richer countries at risk of older age populism. These countries have relatively older populations (only 40% or less of the population aged 0-29) and higher GDP per capita ($20,000+).

Demographics, combined with breakthrough innovations and strong institutions, have made America very wealthy in recent decades. We are now at a critical juncture and at risk of squandering our prosperity by focusing on a wrong set of problems and by empowering the wrong leaders, Trump and stage 1 cronyism that will lead to Sanders and stage 2 cronyism, or socialism.

One thought on “Father of the Bernie Sanders Presidency”