How many Africans will have access to electricity by 2050?

Given the expected boom in the African population and the likely increase in access, the demand for electricity infrastructure is going to explode between now and 2050. On UN estimates (medium variant), the sub-Saharan population will jump from 886 million in 2012 to 2.1 billion in 2050. Assuming that each country’s current access rate remains the same, 381 million additional people will have access to electricity and 855 million additional people will not. 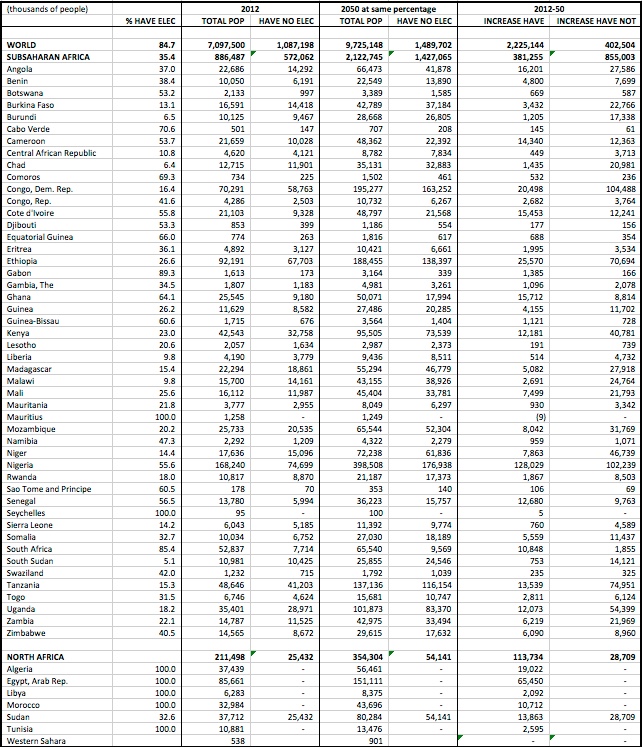 In order to maintain its current low rate of access, sub-Saharan Africa would have to increase its power generation by at least 100%, and more likely by 200% or more if one accounts for the frequent power outages across the continent.

In order for the subcontinent to raise to 50% the percentage of people who have electricity on a reliable basis, it would need to increase its electricity generation by a factor of 3 to 5.

Then there is President Obama’s Power Africa initiative launched in 2013 which seeks to “double access to power in sub-Saharan Africa”. At first, Power Africa focused on six countries – Ethiopia, Ghana, Kenya, Liberia, Tanzania and Nigeria – and its goal was to add 10,000 megawatts of electricity generation and 20 million new connections.  But during the US-Africa Leaders Summit of 2014, the program was expanded to other countries and its scope was tripled to 30,000 megawatts and 60 million new connections. (Note: this assumes 2,000 connections per megawatt. In developed countries, the ratio is often closer to 1,000 connections per megawatt).

A July 2015 fact sheet from the White House states that Power Africa has helped bring on line 4,100 megawatts to 4 million connections. But critics claim that these projects were already in progress before the program was introduced and that new projects have been slow to get off the ground. As reported in this New York Times article, Sam Amadi, chairman of the Nigerian Electricity Regulatory Commission, the country’s electric power regulator, recently said that he was “not aware of any concrete plans for power plants that have emerged as a result of Power Africa.”

In the long term, if ‘double access’ means doubling the number of people who have access to electricity without necessarily increasing individual consumption, that would translate into access for an additional 314 million people, roughly equivalent to the current size of the US population.

But if ‘double access’ means doubling the percentage of people who have access to electricity, that would mean enough new electricity to reach an additional 1.19 billion people on the continent in 2050. This number exceeds the 2015 combined populations of the USA and Europe.

If Africa reaches 100% access in 2050, it will have built enough infrastructure to reach 1.8 billion additional people, a near six-fold increase from the number that have access today.

Other populous nations of the world already enjoy higher access rates. But here also, there is likely to be significant new demand from rising population numbers. Assuming the same access rates in 2050 as in 2012, there would need to be new infrastructure to reach an additional 708 million people living in Mexico, Brazil and several Asian countries.

And here are per capita consumption numbers for other emerging nations:

As usual, financing and execution will be the main hurdles but it is clear that the demand for new electricity infrastructure is going to be very very high in Africa and in Asia.