The ratio of the price of gold to the S&P 500 shows two notable extremes that are clearly visible in the log-scale chart below. The first was a reading of 6.1 in January 1980 when gold spiked up to $850 per ounce and the S&P 500 was struggling to shake off the 1970s syndrome of “death of equities”, “misery index” and “malaise”. The second was 0.19 in July 1999 and subsequent months when gold hit a multi-decade low of $252.8 while the S&P 500 soared on the wings of the Nasdaq bubble. 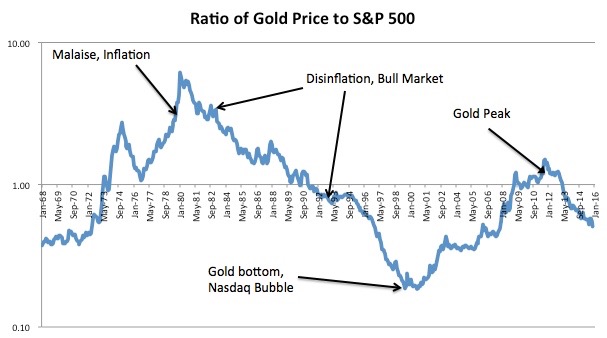 There is no doubt that there is some exuberance in the stock market, but it does not necessarily follow that the ratio should quickly revert to its long-term average. After all, one may ask, why is this ratio even relevant? It is a question that is justified if you believe that gold should only reflect inflation expectations. Then it would rise or fall with inflation fears.

But in reality, there is more complexity in what drives the price of gold. Inflation numbers were similar in the 1990s and 2000s but gold fell in one decade and rose in the other. Therefore, inflation alone is not enough to explain its behavior.

What drives the price of gold will be the subject of another post. But here it is enough to say that it is driven in part by several factors which are the inverses of those that drive the S&P 500. It makes sense therefore to keep an eye on the ratio.